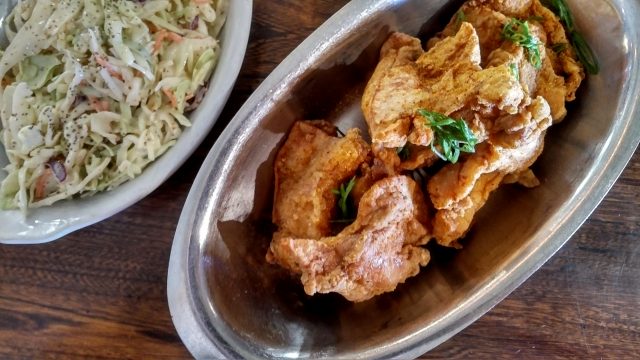 I’m sure it has been a very long time – if there ever was a time – since we’ve had a saloon in Kitchener, but a modern version of the classic western American bar has graced the space on Ontario Street South between King and Charles streets that was vacated by the popular Marisol Restaurante for a few years now.

It’s a great venue, so I thought I’d revisit it — and its history.

The Grand Trunk Saloon, by virtue of its name, has an interesting history and offers something unique to downtown Kitchener as it continues to build and evolve.

“When we came here a few years ago, there were a couple of things missing in the downtown core of Kitchener and we know we add to the mix of super-cool restaurants showing up now,” Haus said.

“The name is certainly inspired by the Grand Trunk Railway,” said Patel. “The saloon part came about because we wanted something unpretentious. We want people to come in here and be able to be relaxed and casual.”

The name and concept of Grand Trunk Saloon (GTS) captures both historic and current elements: The Grand Trunk Railway of Canada became the major railroad connecting Toronto and Montreal in the years before Confederation.

It was an important transportation mode that also helped to build Kitchener (then Berlin) and the surrounding towns and areas when it arrived here in 1856. There was a small station built at Weber and Victoria streets, which, though renovated, is now the VIA Rail station.

Patel remarks that today the railway reference is entirely fitting, given the arrival of the ION Light Rail Transit that runs just outside the door — and whose construction storms and obstacles they successfully weathered.

“The name is certainly inspired by the Grand Trunk Railway,” said Patel. “The saloon part came about because we wanted something unpretentious. We want people to come in here and be able to be relaxed and casual.”

Indeed, the idea of a western saloon lends itself to the casual concept. Having evolved in the early 1800s, the American saloon served trappers, prospectors and cowboys, focusing on beer and spirits with food only as a secondary concern.

There likely are few trappers and prospectors in these parts (of the cowboys, I am unsure); however, Haus says the restaurant will focus strongly on food but will not be a barbecue restaurant, except for some “bits and pieces.”

Rather, he adds, GTS will capture the spirit of the food of New Orleans and regions like low country South Carolina. “It’s based heavily on bar snacks, small plates and dishes that people can share,” he said.

Without a doubt, the Saloon has some of the best cocktails in southwestern Ontario, the beverage category being a passion and expertise of Haus and GTS bartenders; they whip up inventive and delicious drink with home-made ingredients such as their popular “Coffee and Cigarettes,” with Bourbon, Amaro and their house-made tobacco bitters. It’s a very, very good drink.

Chef Rich Hodge takes care of the kitchen and back of house. You will currently find his jambalaya, chicken and waffles, duck gumbo and a cast-iron burger on the menu.

I have to point out: the fried chicken, a six-piece bucket for $20, is simply fantastic.

Arts and culture too

GTS, at least before the plague hit, has also been an arts and culture centre too: the interior of the restaurant displays works by local artists and photographers, as well as featuring an acoustic music component and local musicians.

I sincerely hope that aspect can return to all the music venues in Waterloo Region very soon.

That spectre of construction and the traffic disruption that was part of the downtown core now having settled, GTS, Grand Surf, Sugar Run, the re-opening of the Walper Hotel’s TWH Social and a refurbishment of The Rich Uncle, and more, signal that a food-and-beverage “density” is building in the city centre.

The Saloon and other businesses — more than ever in the conditions of the pandemic — are looking for the momentum to build again, according to Patel.

“We think with all the additions to the core, downtown Kitchener will be the food destination that we want it to be.”