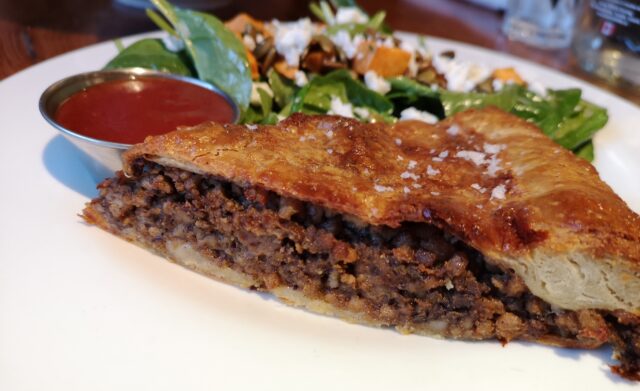 If there are quintessential Canadian dishes, out of many possibilities and other than poutine, the tourtière must be considered a top contender.

Basically, a meat pie that is ensconced in the culinary canon of Québécois dishes, the tourtière has long been a part of the menu at Miijidaa Café + Bistro, a restaurant that is part of the Guelph-based Neighbourhood Group.

Quebec tourtière has been made since the 1600s when it was a staple dish that, in its humble but delicious origins, was a really just a way to use up leftovers and kitchen scraps.

Jehane Benoit, Canada’s version of Julia Child in many ways, is often cited with helping give the dish its iconic status.

Having cooked for the Charcoal Group and Timeless Café in Waterloo Region, Vita Saelzer was a line cook when she helped open Miijidaa in 2015: she’s now chef de cuisine overseeing the kitchen in the downtown restaurant and knows the Miijidaa menu and its orientation well.

“Miijidaa is Canadian fare and we’ve tried to pave that way, given that Canada is a melting pot of cuisines,” Saelzer says. “We try to stay local with our ingredients, where we can.”

To learn more about Miijidaa and tourtière, visit Guelph Mercury.