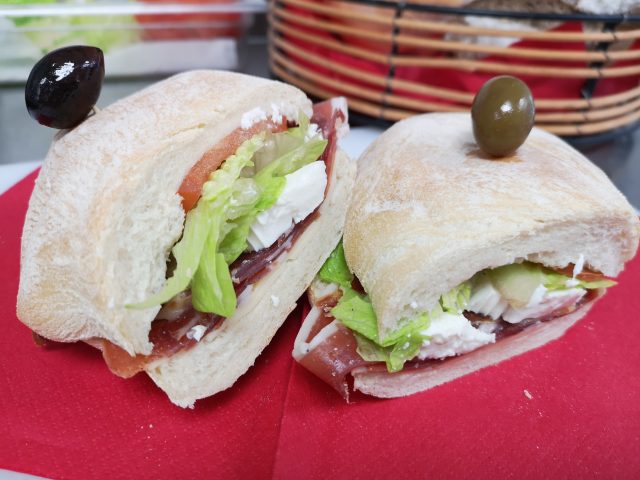 [Previously published] You can never discount the power that a sandwich has to satisfy. It’s a simple combination: bread, meats (or not), cheese, crisp lettuce and some sort of butter, mustard, mayonnaise or a blending thereof.

Now when a sandwich is set within a community context and has an historic and geographic story – an origin story – that goes with it, that’s even better.

To that end, Paulo and Julie Neves own and operate Torreense Portuguese Store in Kitchener’s Mill-Courtland neighbourhood, south of the city centre.

You can’t miss the building at the corner of Stirling Avenue and Mill Street with its massive and beautiful spray-painted mural by artist Stephanie Boutari.

Over the two-and-half years few years they’ve owned the store, which has been at the location since 1972, the Neves have grown the business and its food component and have become a solid and dedicated community hub in the immediate area.

It’s much more than a store for buying food supplies: it’s simply wonderful to visit and listen to Portuguese being spoken and hear the back and forth of conversation – even if you can’t understand what is being said.

The clientele is about 50 percent neighbours with Portuguese background and 50 percent everyone else. But they all come to buy daily-delivered breads, meats, larder supplies, bulk dry beans, blood sausage, olives to scoop and, of course, the delectable pastel de nata custard tarts that are delivered three times a week.

At this time of the year, there’s Portuguese chestnuts too.

“We try to be a little old-style. I think that’s more fun,” Paulo Neves says of the bulk supplies. “People can pick up the quantity they want.”

While there’s also a small display of religious iconography, a primary attraction is downstairs (and soon to be moved upstairs): the Neves serve a wide selection of nearly two dozen fresh fish, brought in on Thursday, from fresh sea bream, whiting and boca negra to red snapper, mackerel and sea bass. It’s a remarkable selection. “It goes much beyond salmon,” Neves says.

One of which is seven-months cured, there’s also three kinds of dried salt-cod, from Norway, Portugal and Canada; it’s an historic fish staple of the Portuguese which links inextricably the history of Canada and Portugal from centuries ago.

The origin of the sandwich – referred to as “serrana” by Neves – is a mountainous region of Portugal. There’s no good translation, he quickly adds. “It’s from the mountains and the people, the shepherds and herders, who take care of the sheep” he says.

The sandwich is hefty and filling and balances textures and salty flavours held in a large pada bun. It’s similar to the classic Portuguese papo seco.

“There’s also lettuce and tomato, but no onion,” Neves stresses with a wry smile. “It’s forbidden to put onion on because it will ruin the flavour.”