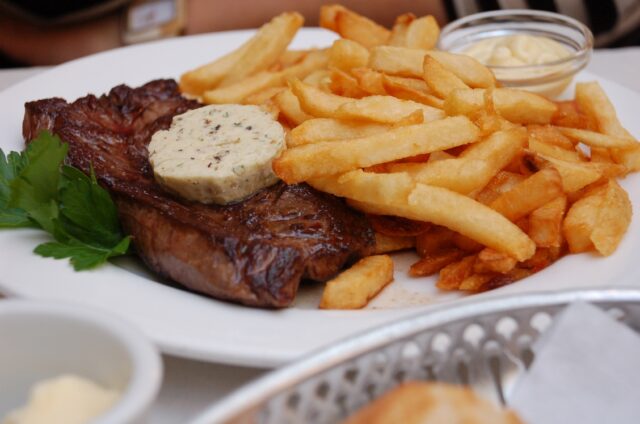 This myth, persistent today, entered kitchen lore in the mid-nineteenth century thanks to German chemist Justus von Liebig, a professor at the University of Munich.

Von Liebig had a life-long interest in cookery, and, though he never wrote a cookbook, he did have an immeasurable impact on cookbook writing and food processing.

Among other research, he was certain that essential nutrients in food were lost during the process of boiling and roasting them.

The solution, according to von Liebig? Sear meat proteins at very high temperatures to form an outside crust on the meat — and “lock in” the juices.

Harold McGee debunks the myth in On Food and Cooking, but the damage had been done — and from about 1850 until today, the von Liebig principle was accepted.

Granted, we can credit the chemist with helping shift cooking philosophy and our understanding of food preparation toward the science side of things.

Searing a food — drawing on what is known as Maillard reactions — does give it added flavour, but it does not “lock in” moisture.

McGee pretty effectively explains the myth, and it is something you can test for yourself. When next searing a steak in nice heavy cast-iron pan before bunging it in the oven to finish, have a listen: the sizzling sound you hear, McGee explains, is moisture is leaving the ribeye and more or less continuously being burned off by the heat of the pan.