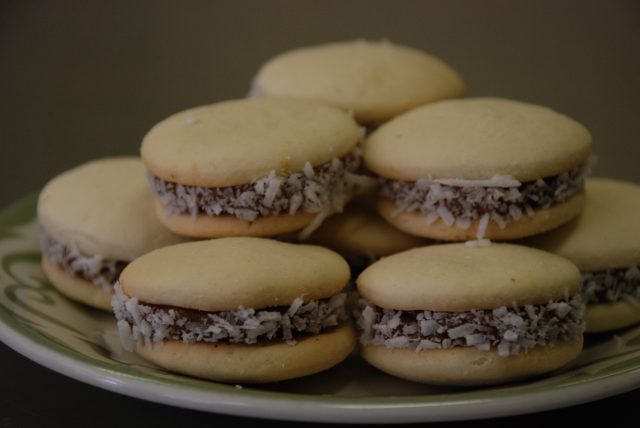 In September of 1899, the Carnation company launched “Carnation Sterlized Cream.” The company eventually changed the name to “Carnation Evaporated Milk.” It was a good branding and marketing move.

The useful, shelf-stable product that you can find in the baking aisle of your grocery store is simply milk that has had 60 percent or so of its moisture content removed.

What remains is a thick, sweetish compound that has many uses in the kitchen – including make-it-yourself dulce de leche.

The Spanish phrase translates to something like “sweet of milk” or “milk candy,” which is a rich, creamy caramel dessert that is popular in Central America.

For instance, it is the filling of very popular Argentine cookies called “alfajores” — in the banner photo above are alfajores made by Gabriela Vera of KW Empanadas.

You can make dulce de leche at home simply with a pot of boiling water and a bit of time.

The myth of dulce de leche

There is a quaint myth that a mother in South America was warming a can of evaporated milk to feed her children when she heard the cacophony of horses hooves trampling the valley below her home.

She went to investigate and witnessed a battle that was the beginning of one South American revolution or another. Transfixed by the commotion, she forgot about the simmering can and sometime later, when she opened it, she found “sweet of milk.”

Take a can of evaporated milk, whole or two percent. Puncture the top of the can in two places (on opposite sides) with a hammer and a clean disinfected nail.

Set the can in gently boiling water that covers two-thirds up the side of the can. Let it simmer away for a few hours.

What results when you open the can is a thick, creamy and sweet golden custard that you can pour into a bowl and whisk to incorporate any lumps that may exist.

The preparation has many uses and dessert applications, from a cupcake frosting to a donut filling — or, to simply eat off the spoon.