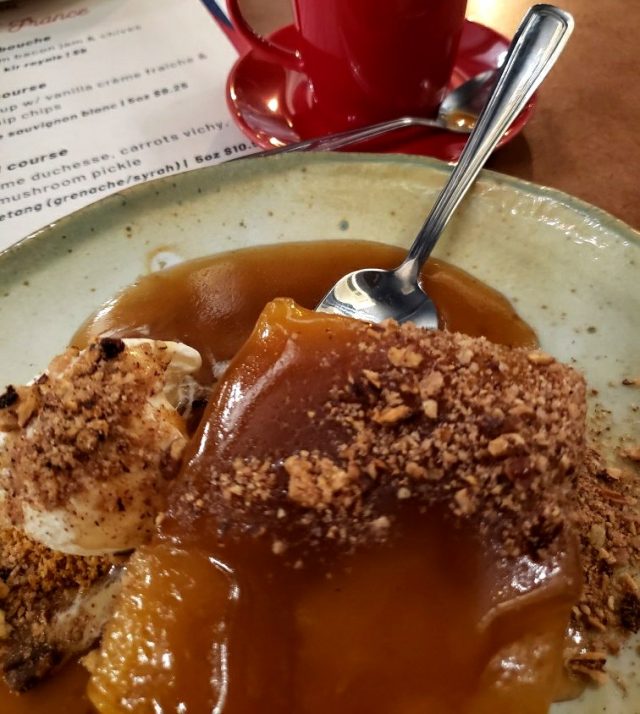 I hadn’t been to Imperial Market and Eatery since the space it occupies was a pub called Eddly’s, and that was at least six or seven years ago. Today, as Imperial Market, it’s an even more beautiful space, in a building that is 140 years old and with a remarkably rich history, in the heart of New Hamburg.

The occasion for which I visited last last month was to get a “Taste of France” in a special new series Imperial has started. It’s my hope that even during the considerable obstacles put in front of the hospitality industry by the pandemic venues like Imperial can weather the storm and that these events can remain on track.

In fact, I’m writing of my experience during that evening now in the hope that it will put Imperial Market and Eatery on your radar, and that you might visit it, as is possible, and otherwise support it — and that’s my hope for all our food, beverage and restaurant businesses.

In the Imperial Market kitchen, “Taste of France,” and the other series dinners, are the purview of head chef Jaret Flannigan, a long-time chef in the region who has cooked at Grand Trunk Saloon, The Wooly, Borealis Grille and Bar and each Charcoal Group brand except for Beertown. He attended George Brown for his formal culinary training. He is also an instructor at Conestoga College.

The series are special meal event that I think a lot of people enjoy: it’s a different look at a menu with a different vibe to the evening. The series started this past August and has featured Italy, Germany and France.

According to Flannigan, the idea started with a “hey-what-do-you-think?” suggestion from building owner Marie Voisin. “She said she knew a wonderful opera singer, so why don’t we invite him to sing to the guests on the patio,” says Flannigan.

The idea grew from there into themed nights, and they’ve had three successful events — with more anticipated, Covid-19 notwithstanding. “We hope to do a different country every month,” he says. “We’ve talked about doing special events at the restaurant, and we wanted to do something fun like this that promotes business and introduces more people to Imperial.”

Flannigan says the reception by the public has been strong since the events started — the night I was there, the tables (with the limits restaurants were permitted at the time) were full. The ambiance at Imperial is comfortable and — perhaps through a suggestive power — faintly French bistro? Perhaps. To be sure, lovely large windows look out on the street and its twinkling of Christmas lights; it’s really a very warm and quaint setting.

From the food perspective, the nights also give the kitchen team a different energy, Flannigan notes. “We get something new to work toward and play with for the night and learn something at the same time.” The three-course menu was $65 per person with beverage pairings extra.

The amuse-gueule — a pomme purée with bacon jam and chives — drew on the seemingly humble but remarkable creation of French chef and culinary icon Joël Robuchon (who must have at least three dozen Michelin stars) — the spoonfuls were a decidedly rich and sensual pleasure. And yet, it’s only potatoes, jacked up mind you by incredibly delicious ingredients.

“It’s old school and incredibly rich,” says Flannigan. “It’s cream and butter in his mashed potatoes and we added some warm bacon jam and chives. We thought of it as Robuchon baked potato almost.”

The dishes — perfect cold-weather fare — continued with the first course of a roasted apple and parsnip soup with a vanilla crème fraîche and parsnip chips: “Simple, savoury and a bit sweet — a hot bowl of soup is a classic when it’s getting cold outside,” Flannigan calls it. The soup was nicely balanced among those qualities and had good mouthfeel, along with the crunch of the chips.

And somehow when you are in Wilmot Township, you just have to eat an apple. Even better if there’s also a parsnip involved.

The second course arrived in all its meaty glory: braised beef cheek with pommes duchesse, carrots Vichy along with a red wine jus and a mushroom pickle (the cute shimeji version) whose acidity cut through the beefy richness.

Two-days of a bath in red wine and aromatics gave the beef cheeks their start: it was then a sear and slow five-hour braise to create a tender and yet robust mouthful that paired nicely with a scrumptious Château Mire l’Etang Grenache-Syrah. “We reduced the sauce a bit, and it makes it actually a fairly simple and classic dish,” according to Flannigan.

“The potatoes were fun,” he adds. “I was thinking back on it, and that was probably only the second time I’ve made them. The first was at culinary school. Cooked potatoes, egg yolks, butter and cream in there. Some freshly grated nutmeg. Pipe them, brush with more butter and bake them until they are crisp on top.”

Vichy carrots, another textbook classic, were perfectly cooked — not underdone but just yielding to the bite — blanched carrots with lots of sugar, butter and some parsley. “It’s the French trying to get their young kids to eat vegetables,” Flannigan says with a laugh.

The mushroom pickle is a basic liquid of sugar and red wine vinegar and some spices. “We let them rest in the solution for a couple of days,” he says. “It’s a favourite garnish for me for anything that’s braised and rich like the beef cheeks.”

The pièce de résistance — and I am certainly not a sweets lover — was a new and amazing experience for me: pouding chômeur, a Quebecois dish from the 1930s, actually, with vanilla ice cream and candied pecans.

“It’s basic. A loose cake batter — nothing special — of eggs, flour, sugar, milk and butter,” says Flannigan. “You make a loose brown sugar mixture — you can’t even call it caramel — and you bring that up just to the boil.”

The result, with the particular technique, is quite delicious. “The cake batter goes into a pan and you pour this hot caramel sugar-water over the top. As it bakes, the sugar reduces into a toffee-like concoction and falls into it as the cake batter rises. It creates a unique texture that’s like a cake but is also like a pudding,” he says.

I enjoy restaurants in pretty much any of their iterations and orientations, but I especially like the smaller set menus that have a theme; according to Flannigan, many other diners do too. “All three nights did really well. We started out just wanting see how they would do, but the first night sold out fast and we had wait lists for the others.”

The beef cheeks were delicious, but that pudding topped the night — and it was nice that it was “French” in the Quebecois style. I think it sums up what such food experiences can be: education and enjoyment.

It doesn’t matter whether it’s at Langdon Hall or Toque! … or here in New Hamburg. It’s the experience that counts, how the food and the wine and the service intermingle with the ambiance and the energy in the dining room — and from the kitchen. It’s what we’re missing during this pandemic; it’s what we need as we strive to support the industry and re-vitalize it moving forward in the post-vaccine era (as awful as the sounds).

Make sure you check out these venues and give them your support. Do what you can; do what you feel comfortable with. But don’t forget there’s a lot of hard-working people here that want to bring these experiences to your table. Let’s be there for them as we can.