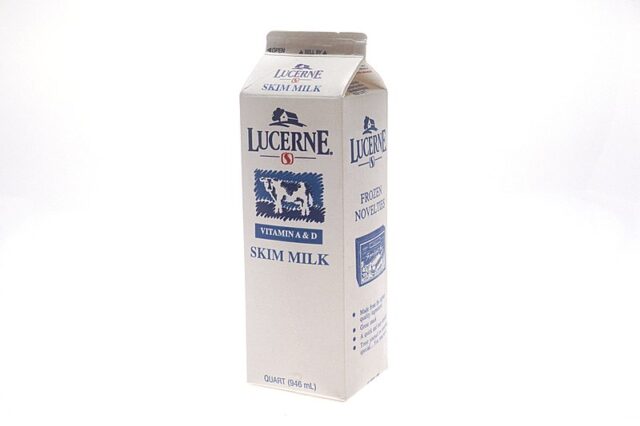 Yesterday, “May the 4th (be with you),” sent me back on an early food memory, while I was having delicious Eby Manor milk with my breakfast cereal.

Whether or not there was tableside entertainment, when it came to the food at our home when I was a kid, everything was pretty much made from scratch, though there were some exceptions, of course. At one point, though he was never a tree-hugger, granola-type-of-guy, my father would make some of his own foods – one that particularly stuck out in my mind was granola, in fact, or some sort of breakfast cereal or another.

I do recall eating many of the traditional breakfast cereals, Froot Loops being a favourite, but for the most part there wasn’t a lot of processed food that made its way into our larder. At one other and horrid point, something disheartening happened to our milk which absolutely ruined the pleasure I had reading the cereal box and studying intensely the accompanying toucan: after no discussion whatsoever (after all, families are emphatically not democracies), a switch in product was declared to be imminent that would banish real whole milk for a powdered imitation version. That met with a small but robust rebellion, shortly after which the usual, recently-excommunicated, milk was returned to its rightful place in the fridge.

But there was still a problem in that I believed some parental sleight-of-hand, a dairy bait-and-switch, had taken place. It had come to be that we were suddenly being forced to drink the abomination that is known as skimmed milk – pseudo-milk – and I was more than convinced that it was unpalatable, and, not only that, but it was blue in colour.

I hated it then; I hate it now.

Whatever happened in the 1970s and 1980s to prompt such a ridiculous fad must have been related to the stupid idea that fat was bad for you; that if you ate fat, you’d get fat.

If skim milk had become some sort of symbol of the fight for better health, then it was based on some pretty bad science that saw a bland, lifeless, vapid drink packed with sugar foisted on my childhood cereal (which, granted, was pretty unhealthy to begin with).

I mean, David Chang and Christina Tosi have a cereal milk at Milk Bar (which is damn good), and I’m quite sure its inspiration was not skimmed milk! I’d bet the skimmed-milk movement was advocated for by a cabal of physicians for whom nutritional science comprised two hours of class time at medical school. I had none of it then; I have none of it now.

And yet, one of Hollywood’s greatest films, including the cinematic feat by Industrial Light and Magic in the awesomeness of the Imperial Cruiser hurtling through space right over your head in the theatre in Star Wars, got me thinking that skimmed milk had a place in the world, if not the Milky Way.

In a scene that I remember very well, the pallid blue drink somehow makes sense, light years from here, when I saw Luke Skywalker drink bantha milk around the family table at the moisture farm on Tatooine: that is where skimmed milk has its place.

Today, I use whole milk from a local Guernsey dairy farm on my breakfast cereal, and I still enjoy reading the box. In a milk update, I’ve recently tried out the de rigueur and similarly oddly-coloured almond milk. It’s just barely palatable but only if I mix in a lot of hemp hearts, slivered almonds, pepitas and Sultana raisins to mask its flavour. That, I’m told, makes it a very nutritious breakfast. But it’s still just as nasty as bantha milk, I’d say.