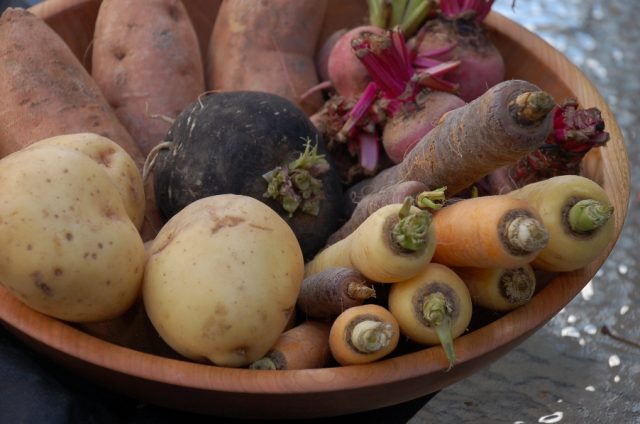 Roots, tubers and bulbs – much of what we might refer to as fall or “winter” vegetables – have long sustained most of the earth’s population and were among humankind’s first foods: plant roots were likely what ancient hunter-gatherers grubbed up out of the ground even before they had figured out fishing, hunting and fire. Root vegetables, you could say, are in our culinary DNA.

Yet, beets, turnips and parsnips have gotten short shrift; until now, that is: autumn harvest vegetables have gained a renewed appreciation as a comfort food appearing on more restaurant menus as meat prices rise and dietary choices change.

So when the temperatures dip and a north wind blows, root vegetables like parsnips, carrots, turnips, rutabagas, and beets are what a hot oven is calling out for.

Tips and techniques for cooking
Of course, there’s no avoiding that adding a bit of fat to root vegetables can really boost their richness and flavour profiles. On grills or slow roasting in ovens, getting a bit of char and caramelization on the vegetables brings out added sweetness and flavour.

When you can, add some citrus or other acidity to your vegetable preparation too: a little bit of vinegar, orange zest or lemon juice, for instance, can enhance the flavours and moderate bitterness.

Try them naked as well: raw fall vegetables grated or shaved adds flavour and crunch to your dishes. Open up the spice and herb cabinet and apply liberal seasonings of spices and herbs – both fresh and dried – to seasonal fall vegetables.

Potatoes
Probably North America’s most consumed tuber, the humble potato is, of course, the stuff of French fries, but it is also a source of vitamin C. They don’t need to be prepared in mashed or baked forms only.

Oven-roasted potatoes are a thing of beauty as well: peel them, cut them in half, blanch them in salted water to almost fully cooked, slather them with duck fat or veg oil, season with salt and pepper, and tumble them into a pan and get them roasting at a high temperature until they are crispy and brown.

Sweet potatoes
A nutrition dynamo, sweet potatoes are versatile: honey-roasted, put into pancakes, baked, pureed and served with pecans and goat cheese, made into soup as well as chips and sweet potato fries.

As for local, look no further than the Simcoe area of southern Ontario: that’s where Canada’s largest producer of sweet potatoes is located.

Brussels sprouts
Related to the cabbage, Brussels (always plural!) sprouts are a perfect fall and winter menu addition. Growing along a tall, slender stalk, the sprouts tend to add bitterness to a plate; adjust that by cutting them in half, blanching and pan-frying or roasting them. Adding bacon to the sprouts adds even more appeal, if that is your thing.

Carrots
A swollen taproot, carrots might be harvested well into late fall. Multi-purpose in nature, carrots can take on a rich and warming Middle Eastern or North African character by adding to them hints of wintry spices like cinnamon, cumin and coriander.

And, if you want to know, the “original” carrot wasn’t orange – that colour appeared only in the 17th century. Additionally, the Elizabethans of Shakespeare’s time considered them only as feed for animals.

Celeriac (a.k.a. celery root)
Not a particularly attractive vegetable, the bulbous celeriac is similar in taste to celery, of which it is a variety. Try it roasted with apples, bacon and maple syrup. Shred or grate it and add it to salads with radicchio, orange and cashews; or, boil and puree it seasoned for an interesting and flavourful plating foundation to a grilled piece of meat.

Black radish
Somewhat similar to its smaller red cousin, the baseball-sized black radish is very hard and can be sliced paper-thin or grated to add flavour and crispness to a salad.

Leeks
Leeks, related to onions and garlic, can tolerate the cold very well and that makes them a great fall vegetable. We are actually close to a major leek producer located in Paris, Ontario: many of the leeks you buy at the supermarket are likely from Canning Produce Inc.

While they do require more careful cleaning between the leaves, they are like two vegetables in one: a white oniony portion and a green “cabbage-tasting” portion. Leeks add terrific flavour to soups and stews but are also excellent roasted, braised, and grilled and tossed with walnuts and herbs. Try them in pasta dishes, frittatas, and in barley preparations.

Parsnips
When roasted, parsnips blend a lovely sweet quality with their tartness. That’s because when “nipped by the frost,” as the saying goes, the large quantity of starch in a parsnip (more than a carrot) converts to sugars. Parsnips pair well with fall apples in making a delicious soup too.

Beets
Red, orange, yellow or “candy cane,” beets have too long been ignored as an excellent earthy and sweet complement to a centre-of-the-plate protein. Try roasting multi-coloured beets or making them into a soup with sour cream.

Use them in a hummus dip or candied with cayenne pepper and cumin seeds. They combine well with other vegetables and legumes such as lentils for a hearty and satisfying vegetarian main dish, and they can even be used with chocolate in a unique cake dessert too. What’s at the opposite end of a beet variety? Swiss chard, in fact.

Turnips and rutabagas
They are not the same thing: the former are the purple and white globes, while the rutabaga is larger and often yellow-fleshed. It is starchier and sweeter than the nicely bitter turnip. Both can be used in stews, vegetable medleys, roasted and pureed.

Cauliflower
Of late, cauliflower has taken off as a hot vegetable dish. A member of the Brassica family, cauliflower comes in a few different colours, all with delicious florets (also interestingly known as “curds”).

It’s a versatile fall veg that can be pureed or simply broken down, seasoned and oiled and roasted to golden brown in the oven. This roasting method even works for a whole cauliflower. Adding a bit of lemon juice or some milk to the water will help prevent discolouration when boiling.