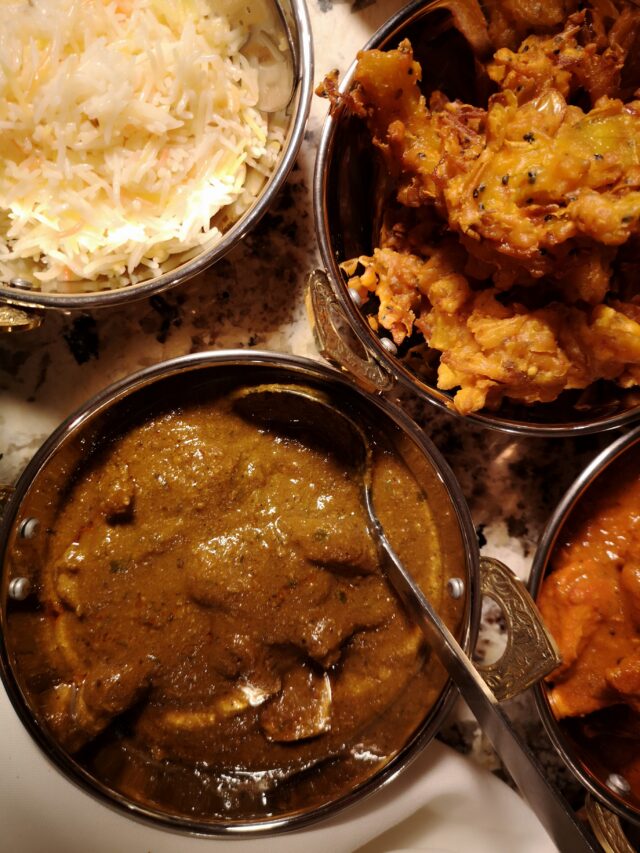 As a dish, vindaloo is simply a hot curry with a protein, sometimes potatoes, and a rich selection of Indian spices.

As a word, vindaloo speaks to a comingling of diverse and divergent cultures and historical intersections that help define the complexity of India and the imperial interest of the Portuguese, Persians and British.

In both cases, there’s a lyricism in the word – vindaloo – redolent perhaps of Dr. Seuss that evolved from the language of Portuguese explorers who landed in India centuries ago: it derives from “carne de vinho e alhos,” which is meat with wine and garlic, and which might appear as vin d’alho.

You can easily see the linguistic leap to “vindaloo.”

A dish originally from Goa, a state on the southwest coast of India, ancient versions of vindaloo first appeared in the 1500s.

As it often is, necessity was the mother of invention: Portuguese sailors stored meat in vinegar to preserve it; vindaloo, therefore, came to be made with vinegar originally.

When Great Britain colonized India, the dish became more popular, and the cuisine as a whole is now a significant part of the British food landscape: Indian food, in its many regional dimensions, is similarly popular in our communities.

As for The Grand Mehfil on Weber Street East, its name refers to a celebration or gathering that features music – making it lyrical too.

But there are two types of music at the restaurant, at least metaphorically: open the door and turn left and you enter a promised calm of a “Royal Indian Dining Experience.”

The 100-seat dining room is indeed grand, colourful and elaborately decorated a faint post-colonial air, plush banquettes, linens and a Queen Anne chair that greets you.

On the small and tight food-stall side, it’s a motorcycle with an artful collection of upside-down umbrellas hanging from the ceiling, a symbol of wealth and status.