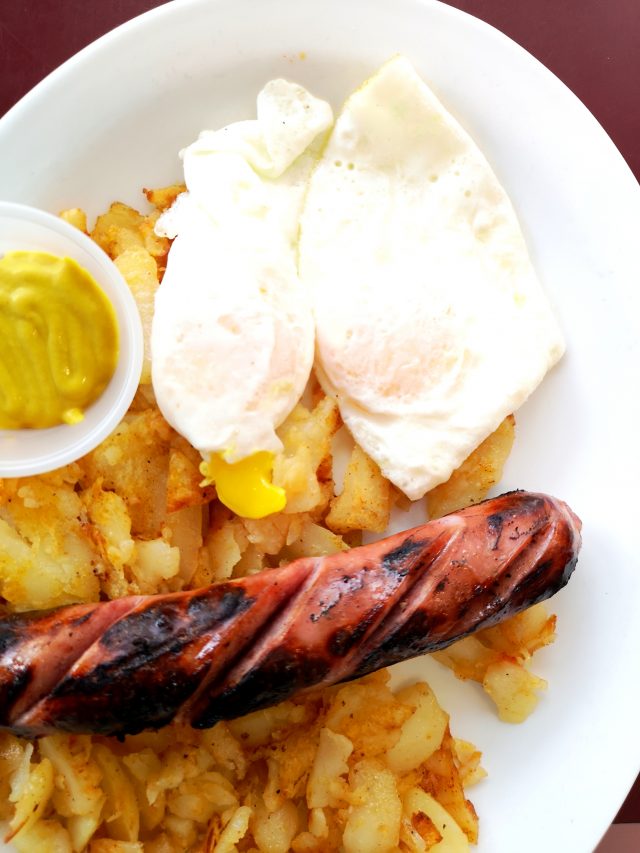 Slices Restaurant is open for business, pretty much as per usual. At the corner of King and Water, the diner-style, pick-up-your-own-tray-of-food venue does good work in helping people in need in the city’s core when they can. I think that’s a good reason to support them, along with a pretty good and inexpensive breakfast at about $8.

[Previously published] The term diner says it best. The word calls to mind the Edward Hopper painting, “Night Hawks,” its diner situated, like Slices Restaurant, at the intersection of two main streets downtown.

It’s simple inside and offers a quiet view of passersby and the busy, gritty city outside, but it’s not lonely like Hopper’s diner. A classic downtown breakfast joint, Slices serves up bacon and eggs and a cup of Joe with no fuss and casual banter.

Enter the front door, precisely at the apex of King and Water streets, find the sign with the red arrow that says “order here,” pay and, when it’s ready, saunter to the end of the counter and take your plate off the pass. It’s there that you collect your cutlery and condiments.

With eight booths, a couple of four-tops and one longer table, the restaurant opened in 1985. The windows afford a good vantage point of the activity, and the seemingly endless construction, taking place outside.

“Some homeless come in, and you can see that they’re hungry. We say pay us what you can or when they can’t pay we’ll make them a breakfast sandwich and they go. It’s doing your part, you know?”

Breakfast is usually quiet, the sun shining in, even when four or five tables are occupied.

“For the most part, people just love to stick with classic bacon and eggs breakfasts. They come in the morning and eat and it fills them for the day and they go on their way,” says Nikola Vladicic, one of the owners of the family business for the last decade.

A large breakfast menu is posted on a white board near the meat slicer. You can get Mediterranean omelettes, Eggs Benedict and a few different sausages. With coffee and taxes in, the basic breakfast special with toast, which I usually get, is just under $10.

Lunch specials rotate and could include pork schnitzel, souvlaki and gyros. Occasionally, Vladicic’s mother will make a pastry. They serve beer too.

Oktoberfest sausage for breakfast is year-round, not just for the Bavarian festival, as is the rich and heavily spiced Polish sausage that Vladicic says are popular when people want to try something different.

Those customers are a wide-ranging lot, from seniors, police officers and students to tech employees from nearby offices. Vladicic calls the cross-section a mixed bag. “There’s an elderly gentleman who walks over almost every day and takes a cab back home.”

The food is home-style, most made in-house, he says. The home fries, sliced and soft rather than chunky, are seasoned and cooked to just a slight crisp at the edges. “Each day, we boil the potatoes, peel them by hand and shave them down,” Vladicic says. “We let them sit to cool and then we grill them with butter and season them.”

The other aspect to the quiet of Slices – and what it means to the heart of the city centre’s west end – is serving the community’s more vulnerable folks. “They enjoy their food, and they leave,” says Vladicic.

“Some homeless come in, and you can see that they’re hungry,” he adds. “We say pay us what you can or when they can’t pay we’ll make them a breakfast sandwich and they go. It’s doing your part, you know?”