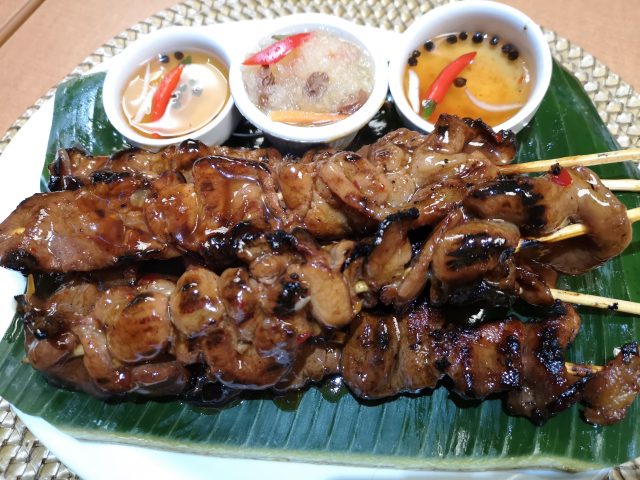 [Previously published]
Filipino food is making its culinary mark in our region. The cooking has a bit of history here, and its popularity is growing.

J & P Filipino Grocery Store has been a long-serving purveyor. At the back of the tightly packed corner store at the corner of Madison Avenue and Courtland Avenue in Kitchener is a hot table serving a variety of lunches for under $10 and baked goods such as pandesal and hopie monggo. They also prepare banquet orders.

This past May, Sari-Sari Filipino Cuisine opened on Lancaster Street, providing another layer of flavour.

A family-run business – six members to be exact – the food operation has been here for decades, primarily in catering and participating in multicultural festivals both in Kitchener and Guelph.

Their bricks-and-mortar operation, near Lancaster Plaza and just about at Union Street, was slated to open last year but was delayed. And then the pandemic hit earlier this year.

They kept calm and carried on, and their small shop with a good-sized patio has been increasingly busy filling take-out orders as they meet a long-standing goal.

“Our family has been doing festivals and catering in Kitchener-Waterloo, Cambridge and Guelph for more than 20 years,” according to Ylynne Enriquez. “It’s always been a dream to open a restaurant. We have a loyal following in the local Filipino community that has supported us, so we took the step.”

Slowly but surely, their cooking has been reaching other food lovers in the past several months.

The family’s history reaches to Balanga, the capital of the province of Bataan. Edwin Enriquez, Ylynne’s father, and brother Kyle are chef and sous chef, respectively. Mom Jeanette, older sister Yvette and younger brother Enrico all have various duties from kitchen prep, ordering and front-of-house service.

Filipino food, by nature of the geographic location of the Philippines, an archipelago of thousands of islands amidst the South China Sea and the Philippine Sea and between China and Australia, is a confluence of indigenous cultures and other cultures (colonial and otherwise) such as Spanish and Chinese.

In the Philippines, a “sari-sari” neighbourhood store, a phrase that refers to “variety” in the Tagalog language, is an important element of Filipino neighbourhoods. “Our food focusses on the Filipino cuisine that would typically be sold at a sari-sari store,” Enriquez says.

That includes quite a bit of pork, rice and draws on the gustatory wonders of grilling and barbecue techniques, some of which you will find on the restaurant’s steam table.
“It’s a good example of a fusion cuisine because we mix Spanish, Chinese, Malay and even Western influences as well,” Enriquez notes.

The several dishes I’ve sampled are defined by an appealing balance of sweet, salty and sour flavours, though it is not always a spicy-hot style of cooking.

You’ll recognize the basics of lumpia – a long, skinny and crispy spring roll with seasoned pork and vegetables and sweetish dipping sauce; less familiar but quite delicious is turon, a deep-fried dessert spring roll packed with an interesting combination of saba banana (an important banana cultivar native to the Philippines) and jack fruit.

“There’s so much more that the cuisine offers, and we will be serving that in the future,” Enriquez adds. “Crispy deep-fried pork belly is made in a lot of Asian cultures, but the Filipino cooking method is different.”

Filipino cooking includes noodles, pork or chicken stews, the latter adobo dishes characterized by a vinegar element that’s eaten with rice. “Bicol Express,” named for a train run in the Philippines is one of the more spicy dishes served as a special: it’s pork stew with coconut milk and chile peppers.

While the cuisine has been simmering somewhat quietly in the background among the various and delicious food cultures of Waterloo Region, Filipino cooking has started to come into its own and take its place at the local table.

That’s come about with the determination and support of the Filipino community, especially during the pandemic, according to Enriquez. “It’s been a long journey,” she says. “We’ve worked hard and have learned how to persevere.”

But part of the success has also been people outside of the Filipino community discovering and embracing the food that the Enriquez family cooks: that fact has been a highly satisfying evolution, according to Enriquez, and one that is helping the business grow.

“They’ve really warmed our hearts. They’re learning about the food and some are even starting to learn the language from the menu when they order,” she says.

“They want to know the culture as they taste the different foods.”