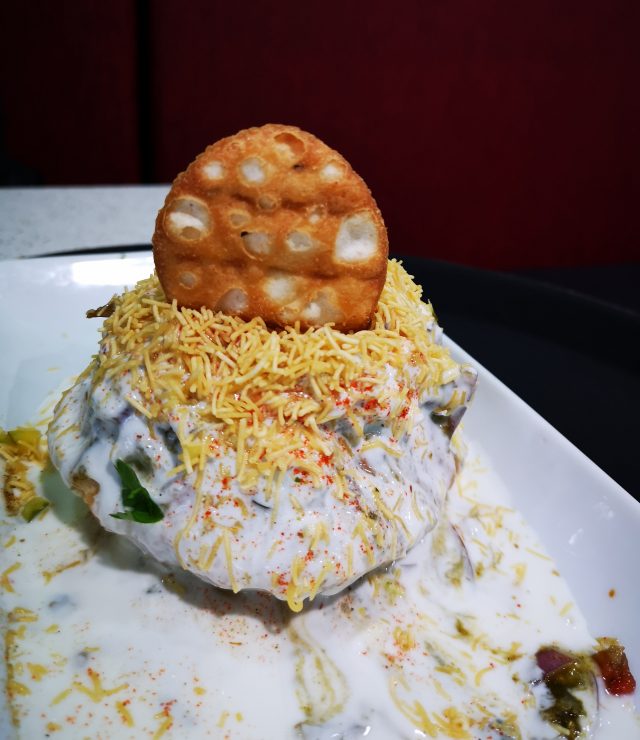 Look for their Waterloo location on University Avenue near Regina Street.

[Previously published]
I’m not a vegetarian, I will be frank, but I do recognize the popularity of the philosophy. Let’s take a visit to a vegetarian restaurant that’s tucked away from the traffic of busy Fairway Road.

The growth of vegetarian dishes at restaurants granted, what I am actually much more interested in is street foods from around the world, regardless of whether they are vegetarian — but Royal Paan fits the bill from that angle.

I’d also add that I’m usually not interested in chain restaurants, recognizing, of course, that they employ many local people, and all of that good economic and investment stuff that we need to have done in our communities.

And so it is we are here at Royal Paan, located in the furthest corner of the “Toys ‘R’ Us plaza” at Wilson Avenue and Fairway Road in Kitchener.

It’s a chain of nearly two dozen outlets across the country that started about two decades ago with the intended purpose, stated on its website, to fill a gap — “the founder wasn’t able to find the authentic Indian version of paan in Canada” — in the foods of Mumbai, a city in the populous country made up of many regional cuisines.

(“Paan” is an Indian ritual and snack with the betel leaf as its base and is part of “Ayurveda,” an ancient holistic-healing medicine; I will leave exploring this aspect of Royal Paan for another column.)

Even in an area of southwestern Ontario with its fair share of Indian restaurants (primarily Punjabi ones), Royal Paan does fill a gap for the street foods and snacks of the subcontinent. You might only find similar foods at an Indian food truck somewhere in our region during summer.

The small sit-in and take-away venue is fully vegetarian but more importantly, it serves unique, interesting and, frankly, delicious dishes.

The main part of the menu is about two dozen items, several of which will be familiar: there is aloo tikki (a potato pancake wrap), masala (a spice blend; Royal Paan puts it on its French fries), bhel (crunchy snacks), chana (chickpeas), paneer (cheese) and puri (spiced crackers).

Other sections of the menu are the sandwich bar (including the spicy and interesting grilled paneer cheese sandwich with green peppers and cucumbers) and the milk bar, each with about eight items and none over $10.

There are also mango and pistachio ice creams, among others, and ice cream-based falooda beverages. I particularly enjoyed a pistachio drink that wasn’t too sweet. A dessert like the kulfi falooda is a semifrozen milk-based concoction large enough for two to share.

Start with a dough pancake stuffed with potatoes, peas and curry spices and rolled to form aloo tikki wrap: it’s simple and tasty and has that marvellous blend of slightly crisp and slightly chewy texture that is so satisfying. It’s served with a spicy and brilliantly green chutney for dipping.

Misal pav is a dish of the central west of India and is a common Mumbai street food. Basically a vegetable curry, it had the most spice heat of the four or so dishes I tried.

With beans, onions and tomatoes, it’s garnished with a savoury, crispy mixture called farsan — as well as a couple of buttered rolls, pav, that have been heated in a panini press.

With its reference to royalty, Raj Kachori (in banner photo) is a fairly large and stately chaat, a snack you could get at a roadside stand. Its primary component is a deliciously crisp and puffed-up little pastry bowl, filled with puffed rice, veggies, chick peas, peanuts and green chutney.

A small puri (shaped like a puffy Ritz cracker) pokes out of the kachori around which is an ample sprinkling of sev (crispy and spiced bits of thin chickpea-flour and vermicelli-like “straw”) along with tamarind, coriander, mango and dahi (yogurt.)

The television blares Bollywood-style music videos and the counter service and casual nature of Royal Paan is a good setting for enjoying a few new vegetarian street-food flavours as a new year begins. fall begins.