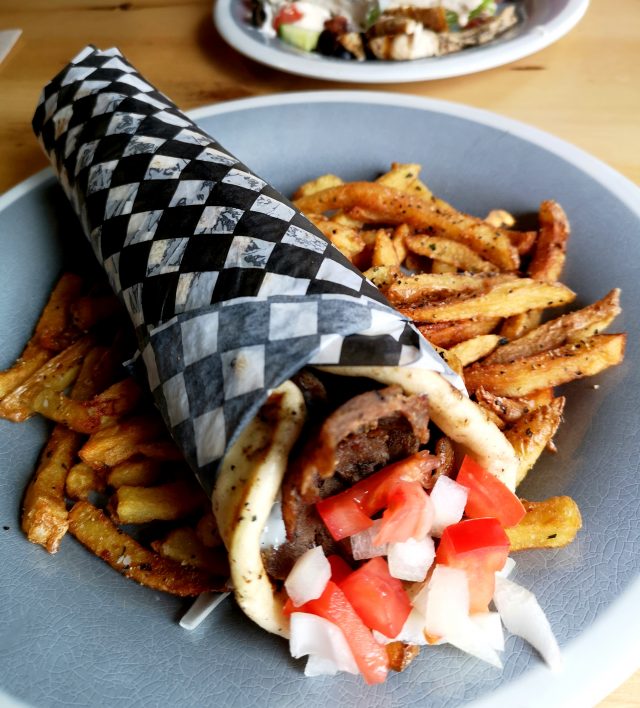 The dining room and extended patio are open at Malt and Barley Public House in Williamsburg, but take-away is still an option the east coast- and Celtic-inspired pub is offering.

The process for that is to call from 10 a.m. on the day you want to take-away. You select a pick up time and pay over the phone, or via cash or Debit when you pick up. Make your way to the front door; or, if you prefer, stay in your car and give the restaurant a call and they will bring your order to you. (Valid ID required for alcohol ordered with your food).

Landlocked Waterloo Region is 1,800 kilometers from Halifax, Nova Scotia. That’s a considerable geographic and culinary-cultural distance to transcend in order to enjoy an “authentic” (and I use the word reluctantly with any food) Halifax donair.

But the new Malt and Barley Public House in Williamsburg in southwest Kitchener has created their version of the iconic street food – and they’ve done it well, too.

The donair is a variation of the 19th-century Turkish doner. It’s meat roasted on a rotating vertical spit with accompanying ingredients and a sauce. It’s relatively simple and very good, if not somewhat unusual, to eat.

I’m not about to argue the origin story, however. Whether it’s Tony’s Donair or King of Donair, the Halifax pita wrap first appeared in the 1970s. Since then, it’s been a huge late-night munchie food after the bars have closed. It’s sweet, it’s messy, it’s delicious and it’s  uniquely Canadian.

There are venerable and popular donair joints closer by in Milton, Burlington and London, according to aficionados who travel there for their fix. Apparently, the owner at the Burlington location is cousin to one of the original donair creators in Halifax.

A bit of sweet

But here at Malt and Barley, they draw on one of their business partners and a cook, both of whom have Halifax roots, to get their Halifax Classic donair ($15 with fries) right.

Co-owner and chef Dave Hutchison (also a principal at Scran and Dram Scottish Public House and Imperial Market and Eatery in New Hamburg) says they’ve researched donairs – and interested local east-coasters have discovered it at the pub.

“We were visiting Halifax and everyone told us we had to get a donair after a night out. We did and just loved it. So we got a vertical spit and played around with creating it,” Hutchison says.

However, the first bite for the Halifax-donair neophyte is a surprise: it’s rather sweet.

Hutchison says the meat is ground beef (they add some lamb and he says the donair is Halal) along with salt and pepper, garlic, paprika, cayenne and oregano. “We mould it and cook it on the spit and shave it thin, so you have a bit of crisp,” he says.

The pita is quickly steamed on the flat-top with a bit of water so it’s soft. But the distinguishing feature is that sweetness.

“The donair sauce is condensed milk, some sugar and some garlic powder,” says Hutchison. “It’s sweet and garlicky, and it’s quite messy.” And that’s it. With lots of raw white onions and tomatoes, the Halifax donair is relatively unadorned. If it has lettuce or cheese and it’s not sweet, it is simply not a Halifax donair.

It’s entirely fitting that a favourite street food from Nova Scotia – translating to “New Scotland” – has found a home in a Celtic pub in Kitchener. It’s as authentic as possible, and it’s caught the attention of Maritimers in the area.

“We’ve kept the donair as traditional as possible,” Hutchison says. “And we sell a lot of them.”