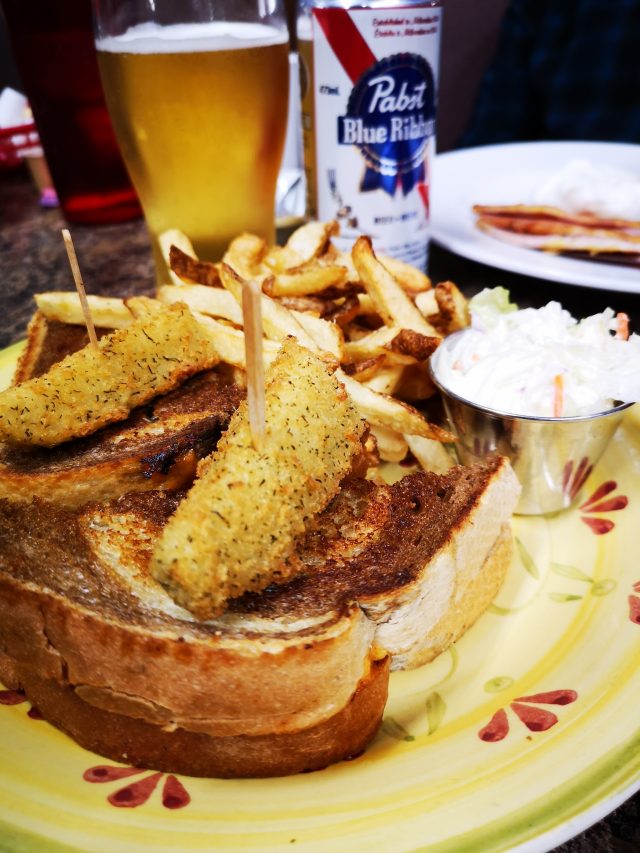 Cambridge Restaurant in the Preston area of Cambridge is open for what they call “parking lot pick-up.” They also have a small patio too.

It’s a 70-year-old neighbourhood-focussed restaurant that is simply a fun and hearty visit. Take the time to pay a visit and support this small family business.

It’s testament that the Cambridge Restaurant has been serving Preston in the same downtown location for over seven decades.

Those 70 years put the family-style venue, akin perhaps to what’s seen on the “Diners, Drive-ins and Dives” Food Network television show, in the running for the longest continuously operating restaurant in Waterloo Region – and right up there with just past the Charcoal Steakhouse’s 64 years.

Change came slowly to the matriarch of breakfast joints: but after he purchased the restaurant in 2014, chef Josh Hayward put his own touch on the menu and the ambiance.

“We kept the old neighbourhood feel,” Hayward says of the 80-seat restaurant with a staff of 12.

He adds that creating new recipes and tweaking older dishes, while cooking from scratch, keeps a kitchen motivated and cooks on their game.

“I love cooking,” Hayward says. “It’s always been my approach to cook, not just heat things up out of a box. There are things we do that could be easier, but our customers come in, and they know we are cooking for them.”

The menu is large – and includes dishes like BLT cheeseburger wraps ($13.75) or the “Newfie” steak (fried bologna) and eggs for $10 – that appear on the blackboards. The Cambridge must be a contender in the restaurant-with-most-blackboard-menus category.

Daily specials include weekday breakfast, a $9 burger, fries and soft drink at lunch and fish and chips Friday. “Tall Boys” beers can be $5 and there’s a few craft beer selections.

Hayward, a veteran cook of 20 years, scaled back the extensive menu when he took over and then gradually started adding new dishes. He treats French fries right, switching from a frozen product to hand-cut in-house, blanched and then deep-fried and finished to order.

He says that the donair, the Halifax classic, is popular with its home-made sweet condensed milk and garlic sauce and adds that there was probably always a Reuben sandwich ($13.25) at the Cambridge.

That’s exactly what I was looking for.

They’ve tweaked it from the restaurant’s original version, Hayward says. “It’s one of my favourites, and I think it’s a perfect sandwich for our kind of restaurant.” He’s right, or course.

The origin story of the Reuben has two distinct narratives: it was either created by Arthur Reuben of New York’s Reuben’s delicatessen for the leading lady in a Charlie Chaplin movie in 1914; or, it was invented during a poker game by grocer Reuben Kay in Omaha, Nebraska, in 1955.

What I like is that Hayward makes the corned beef from scratch and has refined the process over the years. “It’s a triple-A brisket that we pickle in a brine for seven days and then it simmers on the stove for usually about three hours. We add more spices and some vegetables and it’s sliced,” he says.

The bread is from long-established Azores Cambridge Bakery, Hayward noting that it’s a bit more dense and perfect for a nice big sandwich. The sauerkraut is a German import, but the Russian dressing – usually mayo, ketchup, chives and something like horseradish to make it piquant – is made in-house.

A pretty nice crispy pickle garnishes – and can omit the fries with sandwiches and save $2 (but who does that?).

One version of the buttermilk-marinated and double-floured breast has a garlic-mayo, while the other is the (infamous) Nashville hot. “It’s a glaze with brown sugar and cayenne pepper and goes on grilled French bread and topped with coleslaw and pickles to kind of cool down the heat a bit,” says Hayward.

(If you’re interested in the history of the Nashville hot, check out “The New Yorker,” February 4, 2019.)

Among classic diner desserts, the rice pudding and a few others are made in-house: the pudding had just a bit of firmness to the rice and comes with a dollop of whipped cream and cinnamon.

The energy at any full restaurant is always inspiring, for diners and staff alike, and the Cambridge fits that bill.

“We smile,” Hayward says. “We have the most diverse customer base. Seniors, families, high school students on lunch break, bankers. There’s a gentleman who drives in from Kitchener on his lunch break. It’s really satisfying to see that when the restaurant fills up.”