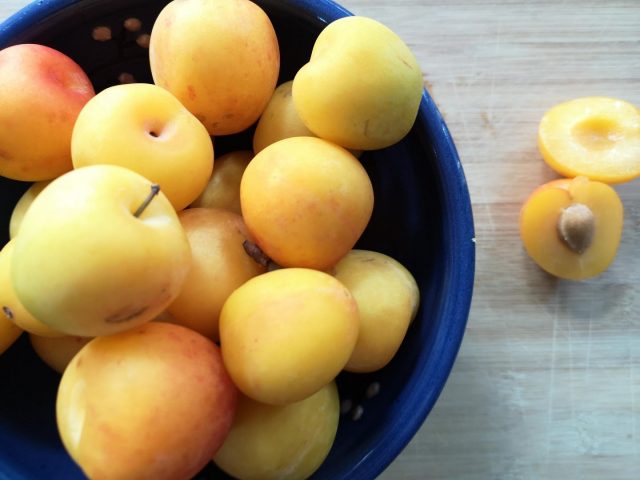 The plums we get in Ontario are, for the most part, either European or Japanese types, the latter actually Chinese in origin.

But whatever their origins, eat them now. I feel that summer is well and truly here — the heat and the sun — when yellow plums start to appear.

That appearance begins in July and August. Early freestone yellow plums called Early Golden are Ontario’s most prevalent plum, followed by semi-freestone cousin, the Shiro. In August moving into September, we will see the red and purple varieties at their best.

A good place to find plums and other Ontario produce is Herrle’s Country Farm Market in St. Agatha.

The Japanese and European plums, although millennia old in their native areas, were introduced to the New World as recently as the late 1800s. Plums are grown on every continent except Antarctica. We should also acknowledge that there is a long history of wild plums in Canada, eaten by our indigenous peoples.

As early as 1875, Luther Burbank took Chinese purple plums, which had been improved by Japanese breeders, and further developed them in the United States. The variety is known as the Burbank plum.

Plums are climacteric: that is, they can be harvested relatively green and allowed to ripen slowly. At home, ripen them at room temperature out of direct sunlight or in a loosely closed brown paper bag. They should then be refrigerated and eaten as soon as possible.

One medium-sized plum has about 36 calories and is a delicious source of Vitamin-C. Yellow plums are great for fresh eating, canning and cooking.

I find that my favourite yellow plums can be deceptive: their thick skin, when you press it, remains firm as if they are not yet ripe. But inside they can be just perfect.

So pay close attention to your yellow plums!

Method
Peel plums and grate bit of lemon zest into them and mix. Combine ingredients in saucepan and bring to a gentle boil. Reduce heat and simmer for 10-15 minutes (depending on how firm your plums are). Serve warm or cold. Store well-sealed in the ice box for a few days.