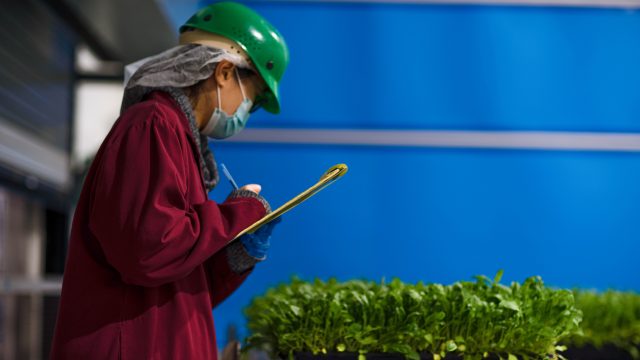 I wrote about this earlier for CBC-KW …

It’s a plain building in an industrial complex in Guelph, a few minutes from Highway 401. Inside is 4,000 square metres of high-tech “vertical farm” operated by GoodLeaf Farms, a Halifax-based company.

[At the time of writing,] in the course of 12 months, GoodLeaf grows, harvests and packages 360,000-kilograms of pea shoots, mustard medley, Asian mix and arugula microgreens as well as baby kale and baby arugula.

The growing room is a couple of storeys high with trays of microgreens settled into a peat moss-based substrate.

To provide an update, late last month, it was announced that McCain Foods has invested $65 million in GoodLeaf to create what Sylvain Charlebois calls “a national network of sustainable vertical farms,” in a recent newspaper article.

“These partnerships are key for Canada’s ongoing pursuit of food autonomy,” said Charlebois in an editorial in The Waterloo Region Record this morning.

To learn more about this vertical farm, see my previous CBC-KW column here.

Food autonomy is an issue for Canada — as we have seen with our lack of vaccine autonomy — as we move forward into an unknown world of weather, climate, automation, food security and population issues.