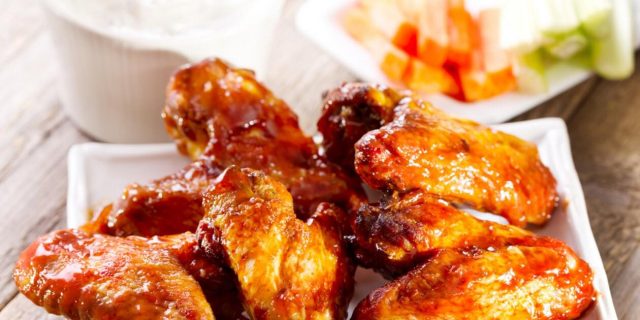 The ubiquitous chicken wing is ready for kick off and will most certainly win game MVP – Most Valuable Poultry – during the Los Angeles-Cincinnati Super Bowl LVI at SoFi Stadium.

I had no idea there was such a body, but the National Chicken Council in the U.S., as cited by Forbes.com, reported in its annual “Chicken Wing Report” that we can expect Americans will consume more than one billion chicken wings during Super Bowl, at least according to pre-pandemic trends.

That’s billion, with a “B.” It’s an unimaginable amount. But at the same time, it’s testament to the enduring popularity of the snack.

Sure, there’s millions of pizzas that will be tossed and millions of kilograms of avocados that will be blitzed, like today’s quarterbacks, to make tonnes of guacamole, but the definitive dish for the planet’s biggest game is by far chicken wings.

In fact, in totality, wings are the definitive sports-bar food in North America, supported heavily by the beer that goes so nicely with them. To my thinking they are simply emblematic of the events and foot traffic that takes place at bars and restaurants across the continent.

They are part of a considerable economic driver as well: just as the Christmas season is to retailers for generating revenue, so too is the Super Bowl and wings for pubs and restaurants.

The Anchor Bar in Buffalo, New York, is reputedly where the chicken wing craze started in the mid-1960s (the Anchor Bar in Waterloo’s Uptown core has closed), but suffice it to say that no matter where they come from, wings are delicious when done properly.

Dredged in seasoned flour (or “naked” if you prefer), the humble wing is deep-fried to a crisp-on-the-outside texture with moist, slightly sweet and piping hot meat inside.

They can then be slathered in a hot sauce (or not) and dipped into a blue cheese dressing and plowed through with munches of carrot and celery sticks.

Wings work – more than a drumstick – because of the soft meat to crispy skin ratio. But which part of the wing is best? First, the anatomy of the “stems and flappers.”

The wing has three sections: at the end, a pointy tip that offers very little in the way of meat; the middle portion, a double-boned “wingette” often called the “flat;” and, where the whole wing joins the chicken’s body, a drumette.

The wing tip is discarded, leaving the flat to be separated from the drumette: the latter is the wing’s meatiest portion resembling, as the diminutive of its name implies, a drumstick.

While I do like the drumette – a tender meaty portion that is dark meat but with a texture similar to white meat – the flat is the part of the wing that I find the most compelling.

Roughly equivalent to a scaled-down version of the radius and ulna bones that you would find in your forearm, the flat of the chicken wing has a binary bone structure that’s more interesting than the drumette.

The interest lies in the challenge to access its dark meat, which requires some dismantling (perhaps a bit of cracking), and what I call lingual manipulation: you have to get in there with your tongue and dig around for the tiny bits and morsels of meat.

The results, however, are worth the effort because meat that is near a bone is richer and more flavourful.

So, at kick off, when that plate of freshly cooked, piping hot wings is set before you, and your frosty mug of beer, what do you reach for first? A flat or a drumette.