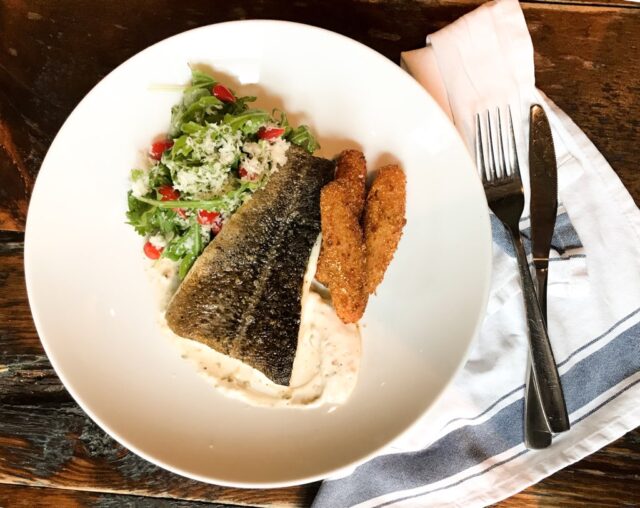 I enjoyed a piece of cod last weekend at The Bauer Kitchen (TBK) in Waterloo. The snowy white fish is from Fogo Island, Newfoundland, a name you might find on only a few local menus.

But having eaten it a few times in the area at restaurants like TBK, Proof and the Walper: it continues to impress. I hope we see more of its kind because the cod ticks a few important boxes: responsible sourcing, sustainability — and, of course, great flavour and texture.

TBK chef de cuisine Tyson Murr adds potato leek croquettes, arugula salad and a malt-caper aïoli to the plate to round it out nicely. He says this piece of the Atlantic is both delicious and part of an important movement toward sustainability and responsible sourcing.

“I want the best possible tasting products we can get, but then there’s the story behind the fish, the community in Newfoundland and the society around it,” Murr says.

It’s what makes me look for the same stories and deliciousness.

The fish is frozen, shipped to China for deboning, filleting and packaging before being refrozen, shipped back to Canada and sold in our supermarkets — as a product of China. That’s ridiculous.

And yet, Canada has 240,000 kilometres of coastline on three oceans and 1,000 fishing communities with seven million people, according to Tony Cobb: the man who has periodically brought the cod to area restaurants with his company Fogo Island Fish.

Cobb, whose family were fishers on Fogo Island for 250 years, wants more Canadians eating more Canadian fish. He points out we import 75 per cent of the fish we eat.

“We’re a fish-rich nation but we’re not eating our own fish,” says Cobb. Like cooks, he’s very passionate about the product.

Fogo Island Fish is a social venture started in 2015 by Cobb and his wife, Janice Thomson. “Fishers were telling us they were getting less money for their fish in 2014 than they were in 1980,” he says.

Cobb’s “Hand. Line. Cod.” approach changes that: his fishers get double market rates; plus, the fish they catch are processed by a Fogo Island co-op. “Our community was getting very little economic benefit from their catch, even in 2014. We decided to invent a fish business that puts the wellbeing of the community into the business.”

His fishers, operating family-owned day-boats, travelling eight or so kilometres from shore, catch the cod in the fall when the fish is at its physiological best — one at a time and only 500 to 700 pounds per day.

Handlining is light years from the way the trawlers extract fish from the sea: there’s one hook and one line and, importantly, no by-catch. The fish is bled and washed at sea and packed on ice within a few hours.

That’s where the chefs come in: they receive it, and the frozen cod undergoes a slow 24-hour thaw and rest — that’s critical to maintaining its “day-one” quality.

“This company has taken a lot of the hard work out of finding responsibly-sourced fish,” says Murr of the Fogo Island process and sensibility.

Although it sounds like a marketing cliché, evoking images of Captain Highliner, “it’s like it just came off the boat.” But simply, it supports fishermen choosing to fish responsibly.

For out part, we can choose responsibly-sourced ingredients such as the cod, an historic Canadian fish — once known as “Newfoundland currency” — that supports the Canadian industry.

Should we care? We should. This is the direction the industry has to go and more restaurants need to support sustainability.

Fogo Island cod answers important questions about where our food comes from and how it is sourced.

“People might choose the cod because they want to eat fish, but we get many customers now asking about the story of the cod. Five years ago, we might have had only one question,” Murr says.

But, the fact remains, customers will have to be willing to pay for it.

I certainly didn’t think $30 was too much to pay for the dish, and I believe we as diners need to accept the responsibility of paying full value — so restaurants can buy and prepare great and responsible products, land or sea.