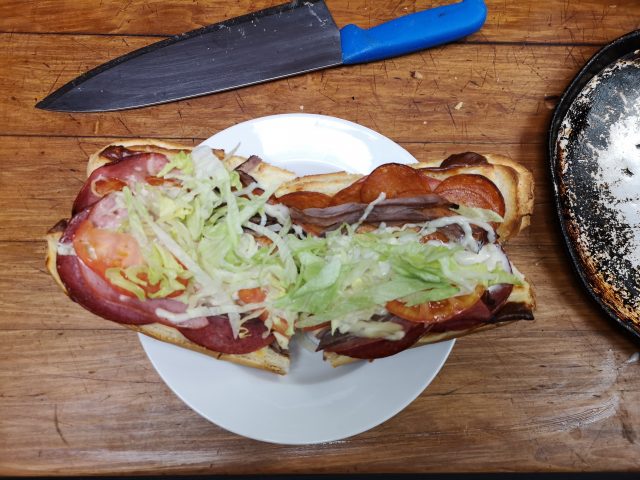 Current Covid-19 conditions have meant that owner Rhonda Firmi has decided to keep the small, tight dining room area closed, for the time being.

“Our daytime hours have changed slightly as well,” Firmi notes. “That’s because the corporate aspect of our business has changed with fewer people working in nearby offices.”

The iconic door into Pepi’s has been changed and there’s physical distancing and plexiglass doing their thing in these crazy times.

“Our dining room area is set up for safe pickup,” says Firmi. “Or call when you get here, and we can bring your order right to your car,” she adds.

[Previously published] The Munchie sub: an iconic, $10, late-night eats in the city; a sandwich of mythic proportions.

“It’s a combination of all of our subs. It has all the meats and then some people add bacon,” according to John Guy who, along with his wife Rhonda Firmi, own three Pepi’s Pizza locations, including the landmark shop on Water Street at Weber in Kitchener.

The pair has owned the restaurants for nearly 20 years. Firmi’s father started the business in the late 1950s.

A Munchie contains two cheeses, and it’s packed with meaty flavour from pepperoni, double-smoked ham, salami, roast beef and bacon. “All the subs are popular, but the Munchie is the most popular,” Guy says.

When the components combine, it’s a blend of crisp and soft, warm and cool—and saucy-drippy—and seems to unite as if it has been in a sandwich press.

“It doesn’t sound like a big deal, but we still prepare and cut everything here,” she says. “The sub’s popularity is a combination of the meat, the baking, the sauce and the name,” Firmi says which captures the appetite. “What is that Munchie? I want that Munchie.”

At 50 years old, the name of the sandwich is part of the legend: late-night revellers (to use a kind word) came into one of the Pepi’s locations and ordered subs to munch: they returned 10 minutes later for a second round. One of the Pepi’s partners at the time decided to put everything on one giant sub to satisfy them.

“These guys were having the munchies,” Guy says, “so that’s how the name came about and how the sub got created.” Firmi adds that it was in the 1970s that then-partner Hugh Nauman came up with that name. Late-night customers would be twenty-deep, and the price went from $2 to $5, she says.

Today, Pepi’s will sell 1,200 to 1,500 subs a week—and more than half of them are Munchies. There’s a range of customers: from a 75-year-old gentleman who comes in saying, “This is the first place I brought my wife when I was 21,” to the much younger Millennial after-bar crowd.

Keys to the Munchie goodness are proprietary sub sauce and oven-roasting. Firmi and Guy won’t divulge what the sauce is, but Firmi admits it hasn’t changed much since her father created it in the mid-1960s.

A Munchie is culinary alchemy: common, everyday ingredients transmute into a sub of gold. The effects have moved the sandwich from late-night counter-culture to the corporate. “It’s become popular with companies. They’ll call and say they want 20 Munchies,” Guy says.

To make the sandwich, Pepi’s staff slices an Azores (Cambridge) Bakery bun in half and adds sliced cheese, the panoply of meats, onions and freshly grated Mozzarella and in the oven it goes. “If you want bacon (from Gadshill, Ont.), that gets fried in a separate pan with onion, and it gets put together,” says Firmi.

Once toasted in the pizza deck oven, the sub gets liberally sauced and topped with lettuce and tomato. “It doesn’t sound like a big deal, but we still prepare and cut everything here,” she says. “The sub’s popularity is a combination of the meat, the baking, the sauce and the name,” Firmi says which captures the appetite. “What is that Munchie? I want that Munchie.”