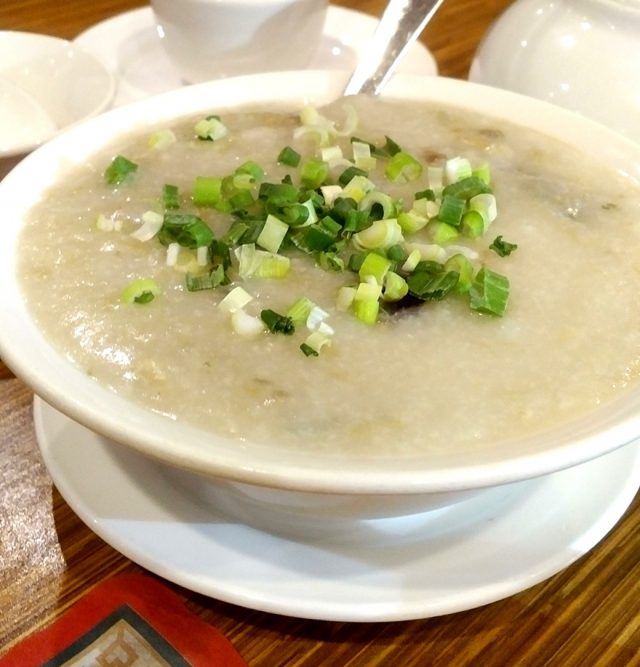 I do enjoy a bowl of congee in cooler weather, and I enjoy as much exploring the different textures and mild flavours of this less familiar rice dish popular in many regions of Asia.

The steaming hot bowl, a comfort food if there ever was one, might be studded with chicken, beef, a few vegetables, grouper and the unusual preserved egg.

Though Jia Jia Lok near Wilfrid Laurier University is good, in terms of consistency, so far Crystal Palace in downtown Waterloo is my favourite.

Congee is in many ways the equivalent of a chicken noodle soup that, aside from being delicious, can soothe a cold or upset stomach.

And when you eat congee, you’re consuming a huge bite of history: the word comes from the Tamil language, the dish having a thread of its origin in Sri Lanka and India. There are recorded accounts of early versions of the dish having been prepared in China a thousand years before the Christian era.

Variations of the dish are made in Korea, Cambodia, Indonesia, Vietnam and many other countries. Interestingly, through their history as early explorers, Portugal has a version called canja, which likely came to the country through its colonies in India.

Some refer to it as rice porridge, and that’s fair enough; others might call it a watery gruel, which does have some culinary accuracy.

Congee, though, is a blank slate: a relatively bland concoction, it absorbs the flavours of what is added to it. Often made with the unlikely proportion of one part rice to ten parts water, congee was a way to stretch out food when the larder was getting bare—and larder leftovers contributed to the taste and nutrition.

First and foremost, however, congee must remain a rice dish and not a meat or fish or vegetable stew to which rice has been added, though it can have a variety of toppings and added ingredients.

Often a breakfast food, congee is also eaten with dim sum offerings, according to staff at Crystal Palace. It might be tricky to find on the menu, so ask for it by name. Their congee is thick and creamy and delicious with shards of pork. It’s a great and simple meal on its own—around $5 for a medium-sized bowl—or a shared appetizer before tucking into spicier dishes.

At Jia Jia Lok on King Street near University Avenue, the congee is thinner with pieces of chicken and long slices of ginger which give it a spice heat alongside egg pieces.

That preserved egg is traditional, giving the congee a heady, almost mushroom-like flavour. Cured for weeks or longer, the egg is deep grey or very dark brown. Also known as a “century egg,” it’s made by curing an egg in an alkaline solution. The yolk becomes jelly-like, making it less familiar to the North American palate.

So, unlike pho, banh mi sandwiches, pad Thai and a host of other dishes, congee just hasn’t caught on with North American eaters, but it has with me. I encourage you to try it.