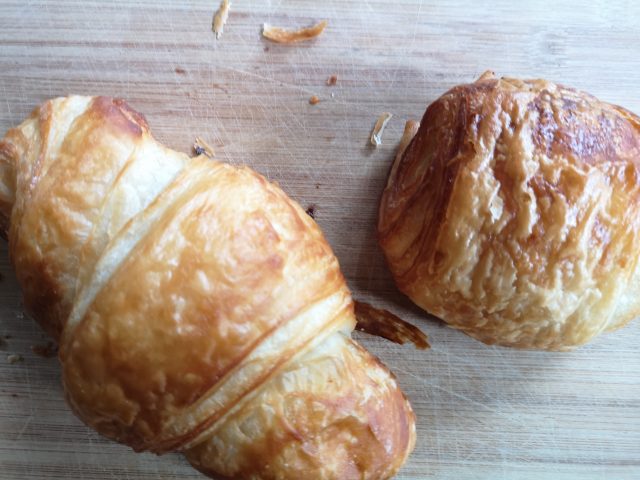 As of sometime this June, Mira Henderson and her Ghost Light Café will have a new permanent location at 188 King Street South. It’s very near the Bauer Lofts in Waterloo.

The small business has done well despite the pandemic, so congrats and best wishes!

[Previously published] Imagine a humble, bare light bulb sitting at darkened centre stage: the ghost light is a time-honoured theatre tradition, one of mythic dimension, that has also inspired a Kitchener baker in starting a pandemic business.

For Mira Henderson and her Ghost Light Café, making croissants has grown out of a love of cooking and baking that started when she was nine years old.

Henderson, 22, was, before the pandemic, in the final year of a B.A. in theatre at the University of Waterloo. Heading into a commercial kitchen only a few months ago has become the first step to a larger goal.

“Once the pandemic hit and school was closed and my part-time job was closed, I fell into baking more as something to do. It snowballed from there,” Henderson says of her growing business.

At the same time, in conversation with friends, she started talking about what she calls the great arts culture that is part of Waterloo Region.

“What I see is a gap in spaces specifically curated for artists, especially during the pandemic and with the closure of Chainsaw, Starlight and Rhapsody,” she notes.

Her goal, therefore, is use Ghost Light Café, currently working out of The Courtyard Kitchens at Whitney Place, Kitchener, as a foundational step to opening a café or bar that is dedicated to fostering arts in the community.

She envisions a café by day “that’s designed to encourage creativity” and then at night a space which celebrates the local arts culture.

I think it’s a good idea – and one made better by some laminated pastry.

The croissant was a big part of the impetus – but almost accidentally so, she laughs. “My dad is a huge croissant fan and in April it seemed like I needed a challenge, so I started making croissants. It something that you can’t cut corners with,” says Henderson.

As part of a genre known as Viennoiserie, croissants are a “laminated” pastry that first appeared on the global scene at the 1889 Paris World’s Fair, but it wasn’t until the 1920s that they became the flakey, butter-rich creations we enjoy today.

The layers of buttery dough, time for rising and fermentation, repeated folds, resting and chilling before being rolled thin and cut into triangles and shaped, the croissant, when baked, puffs up dramatically and shatteringly crisp with a moist, buttery yet delicate interior.

Henderson says some time spent in Montreal piqued her interest in croissants even more, adding that the pastries have become an all-in commitment. “When I started making croissants, I thought I could pursue this as a business. Now I look back and I say that I just created a business.”

Renting commercial kitchen space, next to the production facility of the highly successful Four All Ice Cream, for a few hours has been the epicentre of honing her croissant skills.

Friday is prep day and Saturday morning is pick-up time for customers who have pre-ordered earlier in the week.

She sold 14 dozen last week and estimates she would hit her maximum production at about 20 dozen.

The croissants are entirely hand-made. “All I have are the ingredients, my hands and a rolling pin that a carpenter friend made for me out of an old piano leg,” Henderson says. It’s a beautiful piece of art as well as a functional tool.

She makes the buttery classic croissant as well as pain au chocolate (or chocolatine), Cheddar-garlic, blueberry pie, and chile-lime versions.

Local croissant bakers often encounter difficulty with most commercially produced butter in Ontario: it has a higher water content (more than, say, the butter that croissant-makers in France use) that affects the mechanics of the baking and the flavour and texture of the end result.

“I originally got only mediocre results with basic grocery-store butter. Another butter with added colour was a complete disaster,” she says. “But I did some research and what I do is take Canadian butter which has about 80 percent fat content and get it up to between 82 and 84 percent.”

She does that by taking about 20 percent of a pound of butter and clarifying it, which boils off some water. The clarified butter is cooled and blended back into the pound, now with a higher fat content.

As Henderson continues to tweak and hone her croissant production out of The Courtyard Kitchen facility, the name Ghost Light Café is a place holder, act one perhaps, for what she hopes will be a robust arts-based business in the future.

The term is from the theatre: a ghost light is that small, bare light bulb that illuminates the stage after the performance is over, the actors and crew have gone home and the building is closed for the night. It stands guard as a sort of mythic sentinel until the theatre next re-opens.

“There’s lots of theatre lore around the ghost light, but there’s something even more poignant during the pandemic when you think of theatres, now closed, never going dark and enduring,” says Henderson.

The theatre allusion and the hope within it, it seems to me, is a perfect metaphor to apply to virtually all of our institutions during this darkened period the entire world is experiencing: the planet’s ghost light is waiting, steadfast, as we anticipate a return to our normal performances.

Munching a warm, buttery croissant with a good cup of strong coffee is very comforting until that time.