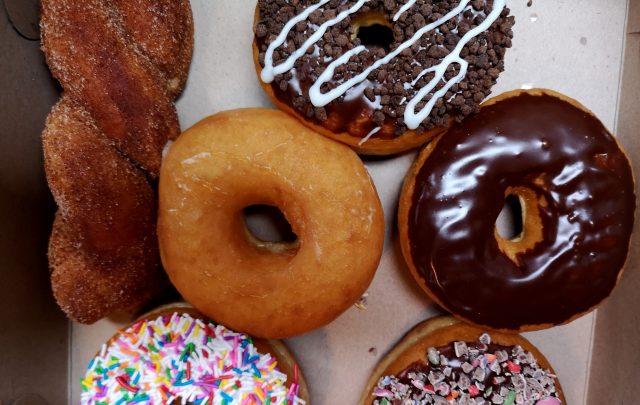 It’s arguable that there has indeed been a donut/doughnut “renaissance” in Waterloo Region over the past five years or so.

The phenomenon has, in part, been prompted by mainstream, chain doughnuteers, in a moment of careless self-relegation, having relinquished their market share and flopping listlessly and par-baked over into the back seat as the quality and character of their commercial pastries have been compromised, removing them from their original place in the front of the pack (of donuts).

Their failing has been due to cost- and quality-cutting and mechanization (and freezing and trucking-in), likely to keep prices down, along with a foreign and multi-national, conglomerate orientation to devour food businesses that were once local, hand-crafted and made on-site within an established tradition.

(Interestingly, Krispy Kreme, so highly anticipated, arrived in the Region a year ago but couldn’t live up to its own self-generated hype and was an epic fail almost immediately.)

However, donut-makers have found their form and have resurrected the pastry to a level that is both inventive, higher quality and more delicious and decadent than ever.

Among popular donuts now in the marketplace are Debrodnik’s, Lady Glaze, Red Eye and Albert’s: among these, donut-lovers have their favourites and will fight ferociously to support their choice.

Here’s a look at Albert’s, previously published in The Kitchener Post. Please support these small businesses as you are able.

I don’t know if you can call it a doughnut Renaissance (because the sweets never really went into the quiet of the Doughnut Dark Ages), but there is renewed interest in properly made Chocolate Frosted, Maple Glazed and Boston Cream doughnuts and their umpteen variations.

There are doughnut shops – and bakeries that make doughnuts – popping up throughout Waterloo Region. In Cambridge, Albert’s Doughnuts Bake Shop opened a couple of months [a little while ago]: Albert knows from doughnuts.

As a self-described third-generation baker, after his grandfather and father, Albert Warzecha brings tradition and training to his craft.

“My father owned a bakery in Poland, and I was trained there to help him. But he also sent us to school, a technology college, to learn. We had exams and we became professional bakers,” says Warzecha.

When he arrived in Canada over 30 years ago, Warzecha started working at Tim Horton’s. “Like everybody else,” he quips. After a few years, he had an opportunity to buy his own doughnut shop in Fort Erie.

Today, his shop on Dundas Street near Franklin Boulevard in the South Cambridge Shopping Centre prepares muffins, croissants and danishes as well as doughnuts.

Doughnuts, a 19th-century American term for what the Dutch called “olykoeks,” are, as the word suggests, pieces of pastry dough fried in oil. They are either yeast doughnuts or cake doughnuts – I prefer the former for their light and fluffy interiors and very slightly crisp exterior.

Albert’s makes delicious versions of these; I tend to like the simplicity of a doughnut such as his Melted Glaze and Cinnamon-sugar Twist, but Oreo Crumble and Rainbow Sprinkles are top-notch too. On the Easter weekend, there were doughnuts dressed with crushed chocolate and candy Easter eggs.

While the latter may be novelty items, Warzecha is serious about doughnuts and stresses the distinction between bakers and mere “doughnut-makers” – it’s a baker’s fine touch he has, honed from years of training and practice.

In addition, real bakers have the technical knowledge about flour, yeast, fermentation and doughnut production. “When something goes wrong with the dough, bakers know how to correct it,” he asserts. “The difference is I have the experience and know the dough. I can make it more fluffy and light and less greasy. But it’s my personal secret how I do that.”

Arriving at the bakery by 4 a.m., Warzecha starts preparing the day’s doughnuts. The end result when you walk in is a colourful panoply of delicious doughnuts and other baked goods – as many as 27 varieties, at one time or another, in the display case in the small shop.

If it is indeed a Renaissance, Warzecha attributes it to discerning customers who want fresh and hand-made baked goods that haven’t been trucked in from Brampton.

“That’s what they’re missing lately because everything is pre-baked and frozen or baked two days before,” he says. “It’s something missing in the market.”