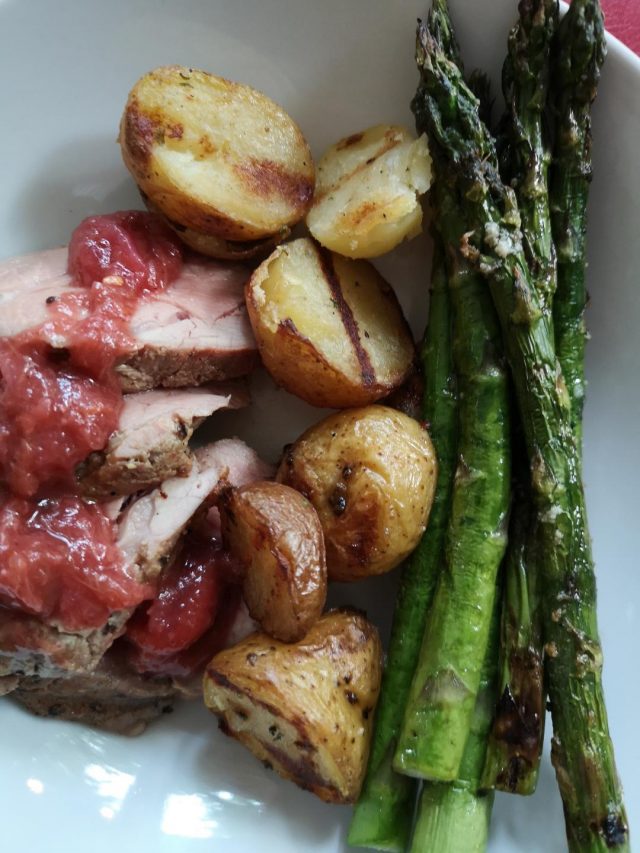 Access to the cafe inside Market Square is of course closed for the pandemic, but Elevenses has been busy sending out its meal kits.

I’ve tried a few of them, and they work quite well. Give them a try if you’re looking to have your meals prepped for you and you just want to cook (pictured is pork tenderloin with rhubarb compote).

Below is a Kitchener Post column I wrote previously: there’s a good comfort-food story about “Gran’s egg salad sandwiches.”

There are times when simplicity dictates; when all you want is a quick, wholesome bite that isn’t fussy and complicated to eat. Sometimes you just need a sandwich to munch on but one that’s maybe a bit more than you would endeavour to make at home.

For that, there’s Elevenses, a small café and take-away shop in downtown Kitchener’s Market Square; it’s become a popular destination for folks who like to pop in and grab a sandwich and a coffee during lunch break.

While co-owner Michelle Luelo has overseen the business’s growth, it has maintained its simplicity and the homestyle fare that comes from her own family background.

“I grew up in my grandpa’s garden and learned about food at my grandma’s elbow,” says Luelo, who owns the café with husband Mike.

The original Elevenses appeared on Scott Street between King and Duke at the end of 2016 but moved shop and four staff to upstairs at Market Square this past May.

The name Elevenses is British idiom for a coffee and a snack taken at 11 a.m. It’s a perfectly quaint moniker — one where form matches function.

They prepare sandwiches, wraps, soups, salads, breakfast bowls, sweets and baked goods, locally roasted coffee and espresso-based drinks and other beverages, including a growing lineup of tea. There are also unique Italian sodas, and they do catering as well.

“The food is just really simple,” Luelo says. “We want to feed people and connect with them. The best way to make them comfortable is with honest food. That’s what I grew up with.”

Come hungry because the sandwiches, either the tuna salad or the egg salad ($8), are generous and filling.

“We throw in a fork,” she says. “There’s always too much filling.”

The slices of multigrain bread, with their bit of nutty flavour, have quite a task holding the creamy and moderately chunky egg salad (ask for a couple of extra napkins): The sandwich must weigh nearly a pound. Thin medallions of English cucumber and mixed lettuces provide a snap of texture against the soft and rich egg salad. Beneath it all is aromatic, slightly licorice-flavoured, dill.

The popularity of the sandwich contributes to the kitchen going through a lot of eggs, says Luelo, who does weekly Kitchener Market shopping for ingredients.

“We always have hard-boiled eggs on the go.”

She also admits the sandwich has special meaning for her.

“My gran was one of the ladies at the legion and her church who would do the sandwiches for teas, funerals, open houses and legion bar lunches. I remember the counters lined with sandwiches in progress. It was the only time we ever had egg salad.”

Both the tuna and egg salad sandwiches at Elevenses have classic ingredients that gran used, the former tomato, red onion and lettuce.

“When I grew older, I came to understand that the food prepared in those kitchens was meant to comfort more than nourish. I always think that’s a big ask for a simple egg sandwich, but it’s always the one that does it the best,” Luelo says.

She’s right. Food, especially what we each in our own families call comfort food, might be nourishing but it’s always about memory. Luelo would agree.

“It’s something I’m laughing at a little bit now when I think about the lunch the ladies put on for Gran’s funeral reception,” she says.

“They pulled out all the stops with the cream cheese rolls and sockeye sandwiches. I’m pretty sure they were afraid to disappoint Betty.”