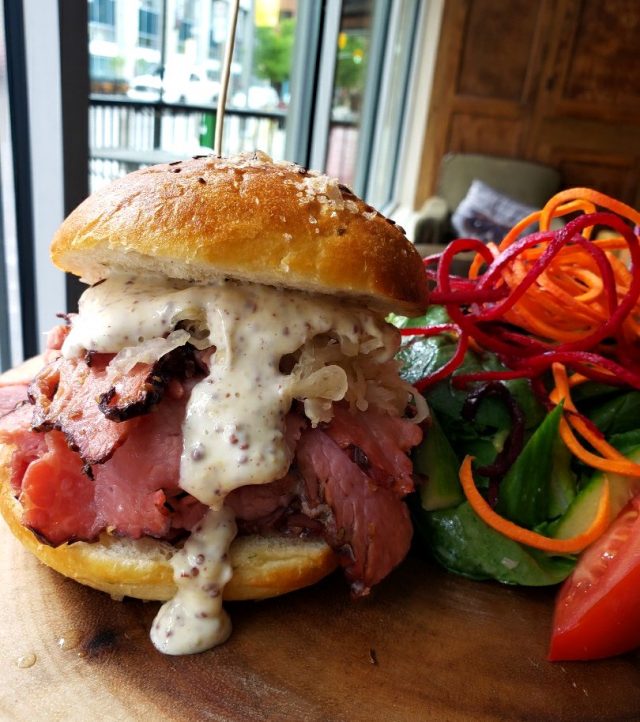 I love sandwiches. The balance of carb and protein, with a generous dosing of condiments, spicy sauces and acidic pickles, makes the hand-held comestible, from grilled cheeses and wraps to burgers and Reubens, a mighty satisfying experience.

The “Beef on Weck” at B at The Museum is exactly such a glory – and one, given its Montreal-style brisket, that is weeks in the making.

Cambridge-born Collin Morrison, B at The Museum head chef, has tweaked the sandwich to shape it into what he wants as a classic for the beer-forward pub of 80 seats: there’s six bar stools and 48 dining room seats with room for 26 on the King Street patio.

Morrison, who cooked at Cambridge’s Napa Grille for seven years before heading to now closed Fistro Bistro across town to join Langdon Hall alum Darnell Gregg, has just re-set the B menu.

“We wanted it to have wholesome dishes full of flavour and using local ingredients,” Morrison says. “I also wanted the food to meet our craft-beer selections.”

The Beef on Weck ($17) does just that: I sipped a Four Father’s “Høyeste Fjell” Norwegian Pale Ale, which had some hoppiness, acidity and a touch of sour that matched the sandwich’s components.

As well as being quite hefty – it requires two hands – the sandwich, like many great sandwiches, has an origin story; the stuff of myth, I find, makes food more appetizing: likely first appearing in Buffalo, NY, “weck” refers to a kummelweck bun, which is topped with caraway seeds and salt.

The original weck was crusty, perhaps akin to a Kaiser, and to its German creator it also had a solemn quality as a remembrance of departed fellow Swabians. As a sidebar, travelling a few kilometers east from B on King Street brings you to one of our famous German clubs, The Schwaben Club, with its Danube Swabian culture.

Otherwise, B’s Beef on Weck is Montreal-style smoked meat, into which a lot of effort has gone, according to Morrison.

“It’s a local AAA brisket that’s brined for nine days in salt, black pepper, bay leaves, Prague powder curing salt, coriander and chilies,” he says. “It dries for three days, then gets crusted with a dry rub and ages another couple of days. It gets cold-smoked, half the time with cherry and half the time with applewood, and then steamed. All told, it’s 16 days.”

I think we do well to understand the time and process needed to make such a sandwich that costs a customer $17 with soup, salad or house chips. The weck is B’s potato-scallion bun sprinkled with caraway seeds and Maldon salt.  “It’s Kozlik’s mustard and our own aioli,” says Morrison. “The sauerkraut is made in-house as well.”

On the surface, it’s a simple sandwich, though its preparation is certainly a little more involved.

“This is a unique meat sandwich,” says Morrison. “It says big, it says local, and when you sit down to eat it, it says you’re going to be full and enjoy every bite.”