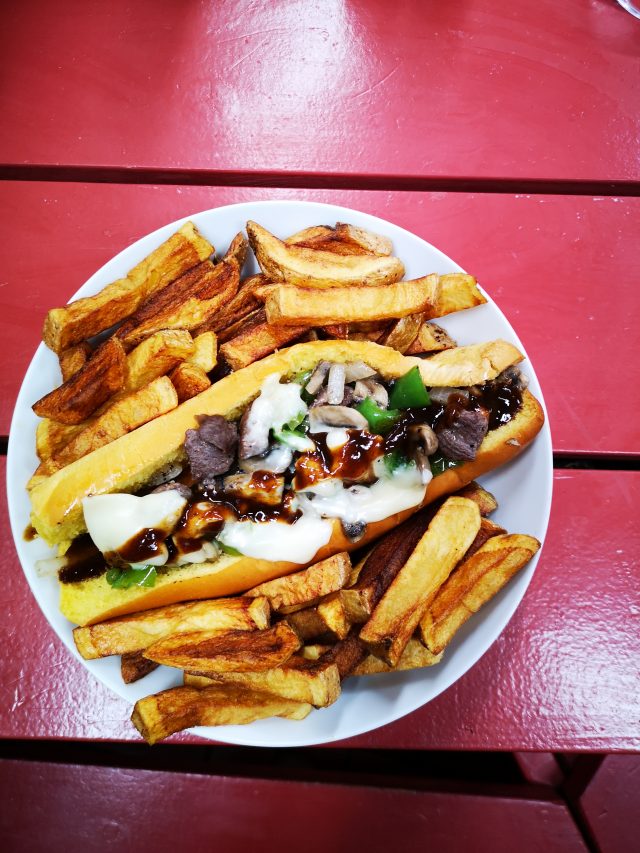 Wuddup Dog owner Todd Johns has recently announced that he is selling the business due to his health concerns. I would like to recognize that he has been an important part of the community. If you are in a position to help, please do so. The recent Cambridge Times newspaper story is here.


[Previously published] Todd Johns has a pretty precise idea about the food he serves at Wuddup Dog. He owns and operates the casual and fun gourmet hot dog joint in Preston, Cambridge, with the texting slang for a name.

“I basically take my favourite foods, and I deep fry them and either put them on a hot dog or on French fries,” Johns says. “If the customers don’t want to eat it, then I can eat and still get a tax write-off for it.”

That’s honest enough; Johns tells it like is, so it makes sense he cooks food he likes.

His favourites, at least according to his Wuddup Dog menu, form a wide range of  hot dogs – with their self-described “gourmet” status – sausages, fries, poutines and anything, really, that works as a deep-fried food. Including desserts.

Johns was formerly an aeronautical engineer. “When 9-11 happened, the aviation field took a nosedive,” he says. “So, I used what I learned there and made a hot dog cart about 15 years ago.”

Wuddup Dog has been at its current location since August, 2018, after he had a couple of other food operations within the neighbouring blocks of the core of Preston.

Inside, the restaurant is simple and colourful with three large communal picnic tables for seating and a few posters on the walls. There’s a “Plinko” game and a machine for buying hockey cards or Pokémon cards. I’m sure it’s a popular after-the-bars-close venue too.

By my rough count, there are more than 30 items on the menu, including over a dozen hot dogs and about a half-dozen poutines. All the dogs are blends of chicken and beef; the gluten-free dog is pork.

There’s a plethora of punny names, too: the “First Degree Burn” dog is loaded with jalapenos; the “Notorious P.I.G.” is bacon, pulled pork, Cheddar and barbecue sauce. The Lord of the Rings, of course, is a hot dog with onion rings

The Philly Cheesesteak dog ($10 with fries and a drink) riffs on the iconic south Philadelphia sandwich likely invented in the 1930s; in many iterations in the “city of brotherly love,” Cheez Whiz is used on the hoagie roll.

But Johns was adamant he didn’t want to go that route for his version: it’s a wiener with sautéed mushrooms, onions, green peppers, grilled steak chunks, steak seasoning and Swiss cheese. It’s hefty.

“I just can’t do Cheez Whiz, or any kind of processed cheese,” says Johns. “I thought why not put some Swiss on there instead.”

Wuddup Dog fries are freshly made to order, and their thick-cut quality gives them hearty potato flavour. “They’re not blanched or anything,” says Johns. That makes the service time a bit longer, but it’s worth the wait.

“I can’t deal with shoestring fries,” he adds. “I like my fries to be a little meaty, so you know you’re biting into a potato and not a deep-fried crust.”

An added layer of interest is the fact that the fries are seasoned with Johns’ version of Australian “chicken salt:” down under, it’s a umami-rich creation that uses cooked chicken, rendered and dehydrated skin and a number of seasonings.

“I’ve duplicated the salt as best as I could with ingredients available here,” he says, adding that there’s a vegan option for the fries.

His idiosyncratic take on the hot dog and all things deep-fried notwithstanding, Johns has garnered his fair share of recognition when it comes to supporting people who are vulnerable in the community, including offering free food on Christmas. That’s a very good thing.

“I try to help out wherever I can,” he says. “We’re all neighbours and many people are only one or two pay cheques away from homelessness.”